Finally have the missing days completed.  This ends week one.

Day Five: A story revolving around an object in your room.

Day Six: Start your story with: “He glanced at his watch impatiently…”

Day Seven: Create A Superhero.  Have he/she save the day.

Day Eight: Write a Prequel to that superhero.  Pre-superhero life.  Maybe their childhood.

I took many liberties with these prompts and twisted them in different directions.

Here is days Five Through Eight:

He glanced at his watch impatiently then back up at her. She pretended she didn’t notice his perusal and stared straight.

“You must get going.” He tried to draw her attention away. Still she looked on as her charge fingers swept over the keyboard. Her face was deeply embedded in the story, it would be wrong to interrupt that flow that doesn’t come so often.

Finally she took her eyes off of her and focused on the man in front of her. His features were never clear to anyone as a spirit guide he didn’t exactly need to be seen. And as a muse neither did she.

“I cannot leave her just yet, she still needs me.”

She knew why he rushed, she could hear it too. The soft begging echoes that pleaded for entrance and for resolve. Some male, and female, some growls of some sort of creature. They needed her guidance but nothing came before her charge.

“Just a moment.” She promised the male guide. “I know Quanisha is your charge but I am her guide too. Her muse. She needs me.”

Just then the sweet calming clicking of the keyboard stopped. Muse turned her head back towards Quanisha to find her inching back from the screen a frown pulling on her concentrated face. Quanisha reached over and picked up her iPod. Her fingers drummed on the desk. She was stuck. Muse approached her ready to help.

She placed her ghostly fingers over the musical device and closed her eyes. Breathing deeply she let the magic run from her fingertips to the device. She just hoped Quanisha would pay attention to her advice. It had taken years until Quanisha quit fighting her talents and used them. Then another year before she let Muse lead her.

The girl was just too easily distracted, stubborn, and a perfectionist. If Muse didn’t give her most of the picture she would never follow without a stern pushing. She was just so afraid to fail.

Tonight though, Quanisha hand stopped scrolling and chose the song Muse had led her to. The song that would most relate to the scene Quanisha was writing. A push of inspiration rolled off the song and into Quanisha’s mind. It was only when Quanisha’s hands moved along the keyboard once again did Muse even think about leaving.

Muse could see the thirteen characters she had led to Quanisha a year ago becoming solid.  It made her proud of Quanisha.  It also made her happy that those characters had found a home.

“Keep her safe.” She demanded from the Spirit Guide that hovered close to Quanisha but not too close where he interrupted Muse’s magic.

He nodded and Muse turned around. She breathed in deeply and let the world recede. Her job was similar to that of a Spirit guide but instead of guiding human spirits, she guided creativity and character spirits.

Characters looking for a good home, a person to tell their story to, and a person to resolve and give them their happily ever after.

Only one this evening caught her attention.

Killing him changed us.

The whisper held echoes of males and a female that seemed to be louder than the males. Muse stopped at the door where voices came from. She tilted her head to right examining and listening.

A dark red paint chipped door, there was a long crack down the middle. The crack was big enough that she caught sight of movement on the other side. She stepped closer examining the movement closer. Suddenly a bright blue eye appeared in the crack and a groan of pain followed. Then the eye changed colors switching from bright blue to brown to green and to hazel. Muse saw the hazel eye twice but a difference in the eye came from the light that shinned in one and was dimmed in the other.

“Death.” She whispered to door. Pain. Confusion. Death. The emotions hit her and she raised her hand to the door.

Please we need help. Killing him changed us. They chanted as they switched eye color from the different characters. The hazel eye that flowed with life was the female. She seemed to be the angriest, she pounded at the door then screamed.

Muse knew this was the one. These character spirits could get help.

“I can get you help. Follow me.” Muse palm light up against the door and within seconds it was diminished. The characters moved as one through the door and she was approached by one the one with the bright blue eyes. He looked young but not so. A teen of eighteen. He seemed to lead the pack. She could not make out his features, only that he was blonde. He reached out and touched her hand. She gripped it and jumped as a shiver rolled over her. With the shiver, she saw a vision. Some of their story appeared behind her closed lids. Snow, children. Racing. Chasing a man. Kicking, punching. Blood. Death.

Then she was jerked out of the vision. His blue eyes still held hers.

Killing him changed us. He said.

She nodded. “Follow me.” Was all she said then turned and made her way to the gate.

“When she is sleep. You must approach her when she is asleep.” Muse held his eyes with hers. “She will give you a room inside her to stay for awhile.”

“And you must be patient for she has her hands full. Give her reminders every once in awhile, don’t let her forget. I’ll help when it is your time.” Then she disappeared, reappearing back to Quanisha’s side.

“All’s well.” The male spirit guide said from his perch behind Quanisha.

Muse nodded and rested her hand on Quanisha’s shoulder. Giving her all the inspiration to finish and prepare her for her next novel. This was going to be a story Quanisha needed her full attention.

Muse knelt down and said a quick prayer as her charges body life came to an end.  She watched as her charge’s spirit lifted from his body with the help of his spirit guide.  The female spirit guide waved bye to Muse with tears brimming in the corners of her eyes.

Muse did the same, a piece of her missing.  Muse’s head rose to the clouds above, her ears tingling.  She was being summoned.

With the next gust of wind, she was carried higher into the heavens.

Muse watched through a cloud portal as a baby’s girl first cry was heard.  “Quanisha A. McGruder is yours to watch over and inspire.”

Catch up on Day One, Two, Three and Four, Day Nine.

And for the whole list of 31 Days of Magic. 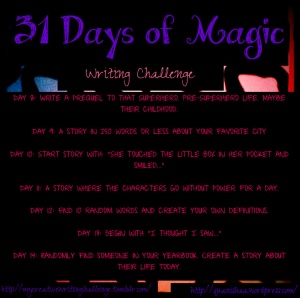 Blurring the lines between poetry and prose